THE NEW ERA OF TATTOO AND PIGMENTED LESION TREATMENTS

The DISCOVERY PICO SERIES is an innovative laser with a contemporary Italian design that opened a new era.

It has been developed by Quanta System with a “historical” solid reputation for ultrashort-pulsed lasers and it is dedicated to all professionals that want to be a point of reference in the aesthetic field, through the most advanced laser technology which offers excellent results to patients. 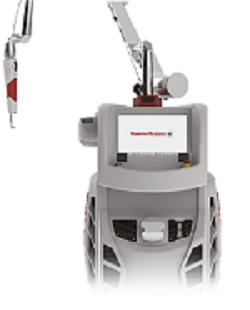 When the laser radiation is emitted at nanoseconds and picoseconds pulses and the power density is in the range of the GW and the laser light is absorbed by clusters or particles of ink or melanosomes, it generates an extremely rapid rise of temperature up to more than 900° C(1). This rapid heating induces an extremely fast expansion in the target, which generates a mechanical wave (acoustic)that crosses over the target itself. The generated wave exerts a pressure that exceeds the fracture threshold of the target, causing its fragmentation(2). Thereafter, the fragments can undergo phagocytosis by macrophages and be removed through the lymphatic system. This is the process called photoacoustic effect which is literally able to “pulverize” particles. To make this happen at the best conditions, the laser pulse duration must shorter than the time of crossing over of the mechanical wave within the target, which for ink clusters is in nanoseconds and for the smallest ink particles and single melanosomes is in the picosecond range, all this leaving the surrounding tissues unaffected.

The picosecond YAG laser can break down the smallest ink particles which compose the black tattoos. This color, due also to the very small dimensions of its particles, sometimes become resistant to Q-Switched treatments showing small improvements at every session. The picosecond pulse can fragments even the smallest black ink particle in a really thin “dust”, which is easier to be eliminated by the body immune system. By emitting at both 532 nm and 1064 nm wavelengths at picosecond regime, Discovery PICO can treat different tattoo colors, superficial and deep pigmented lesions by using also the Q-Switched emission modes. As an exclusive feature of this laser, the Photo-Thermal mode permits to treat also the aged skin (skin rejuvenation) effectively. 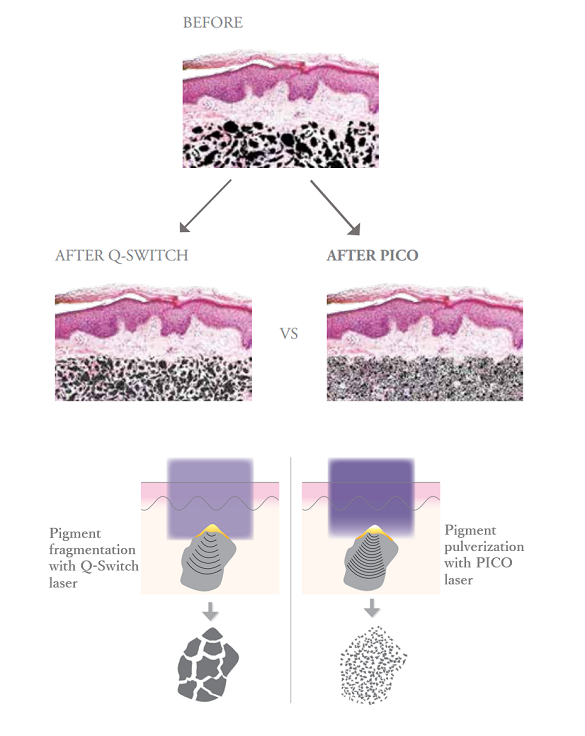 Thereafter, the fragments can undergo phagocytosis by macrophages and be removed through the lymphatic vessels. The photoacoustic effect in Discovery PICO is more efficient compared to Q-Switched lasers, because the exceptionally high laser power generates high internal mechanical pressure, which is literally able to “pulverize” the particles. The extremely short pulses obtain the best results before the scattering energy goes towards the surrounding tissues, in order to produce more effective treatments and greater safety for the patients. To make this happen, it is necessary that the pulse duration is shorter than the time of crossing over of the mechanical wave within the particle, which for the thinner inks and melanosomes is fast, and precise in picoseconds. 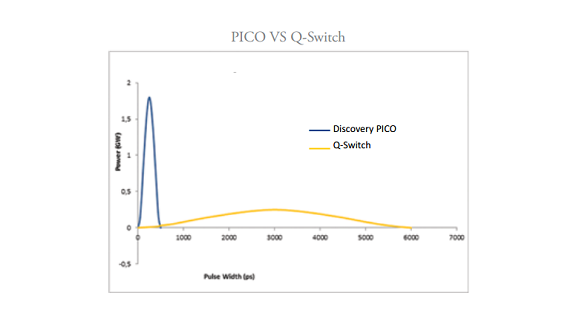 The Q-Switched Ruby of the Plus version of Discovery PICO effectively extends the range of treatable colors. This is the most effective laser for the treatment of blue and green colors due to the very high pulse energy able to really break down the ink clusters. The particles of colors treated by this laser are in average bigger that the ones composing the black ink and are really well responding to ns pulses too. 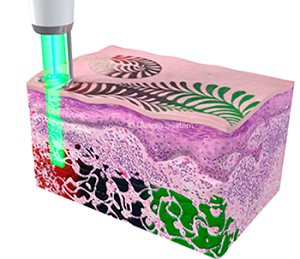 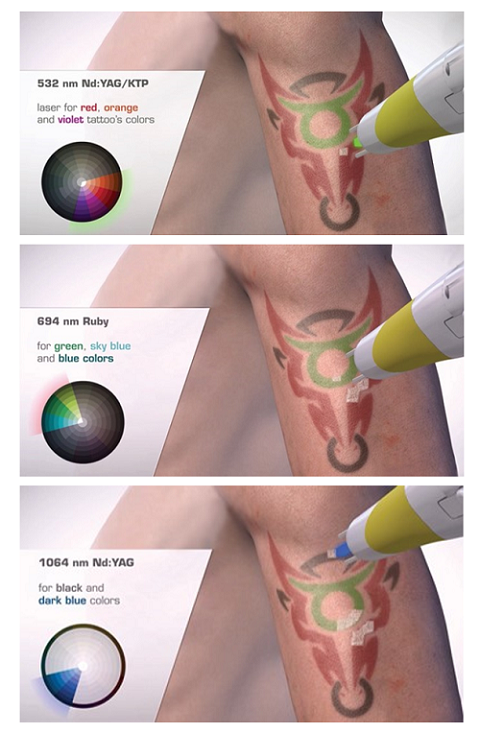 Discovery PICO represents the second generation of picosecond lasers that due to its proprietary technology, is the most innovative medical laser available today in the market.

It has an Nd:YAG double-wavelength laser source emitting at both 1064 nm and 532 nm, provided by the exclusive Quanta Pico-Boost Technology (patent pending). This feature makes possible to work in a Picosecond mode delivering up to 800 mJ of energy and up to 1.8 GW of power and in Q-Switch and Photo-Thermal modes, thus making Discovery PICO the most powerful and flexible laser in its class.

The innovation introduced by Discovery PICO consists in peak power level through ultrashort pulses that is twice more powerful than any other Picosecond laser for medical applications. This has enhanced the treatment results increasing the efficacy on hard-to-treat tattoo inks with a general reduction in the average delivered energy dose compared to traditional Q-Switched lasers.

Discovery PICO is an innovative laser with a contemporary Italian design that opened a new era.

It is developed by Quanta System with a “historical” strong reputation for ultrashort-pulsed lasers and it is dedicated to all professionals that want to be a point of reference in the aesthetic field, through the most advanced laser technology which offers excellent results to patients. 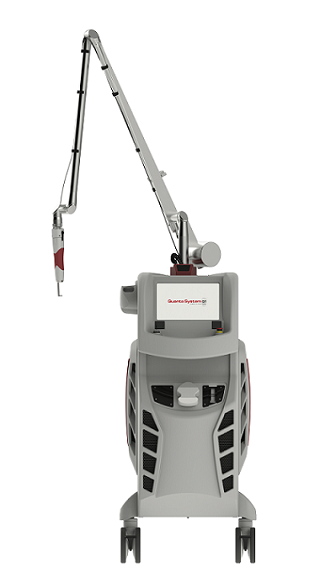 This version is the first picosecond YAG laser with the same specifications of Discovery Pico combined with a ruby laser able to delivers up to 1.2J of energy and not just few hundred mJ such as other “red” lasers. The 694 nm of Discovery Pico Plus are generated by the most advanced and powerful ruby laser available in the market: very high energy per pulse in Q-Switched or Photo Thermal pulses, big spot sizes and fast repetition rates make this laser, together with the 532 and 1064 nm which work also in picosecond regime, a real solution for the treatment of almost all tattoo colors and pigmented lesion even on very dark skins and represent the best combination for unmatched treatment efficacy and safety. 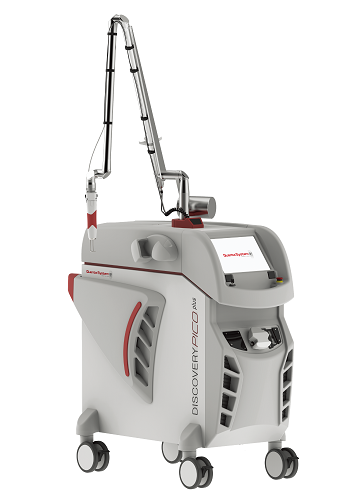 
The Discovery PICO START is the device with a contemporary Italian design that opened a new era of the Picosecond Lasers. It has been developed by Quanta System with a “historical” solid reputation for ultrashort-pulsed lasers and it is dedicated to all professionals that want to start their business in the aesthetic field with the maximum efficacy of the PICO wavelengths.
Discovery PICO START represents the second generation of picosecond lasers with the most innovative and proprietary technology available in the market today. It has a Nd:YAG double-wavelength laser source emitting at both 1064 nm and 532 nm. This feature makes it possible to work in Picosecond mode delivering up to 600 mJ of energy. 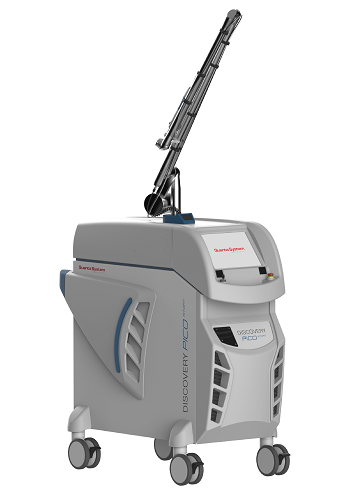 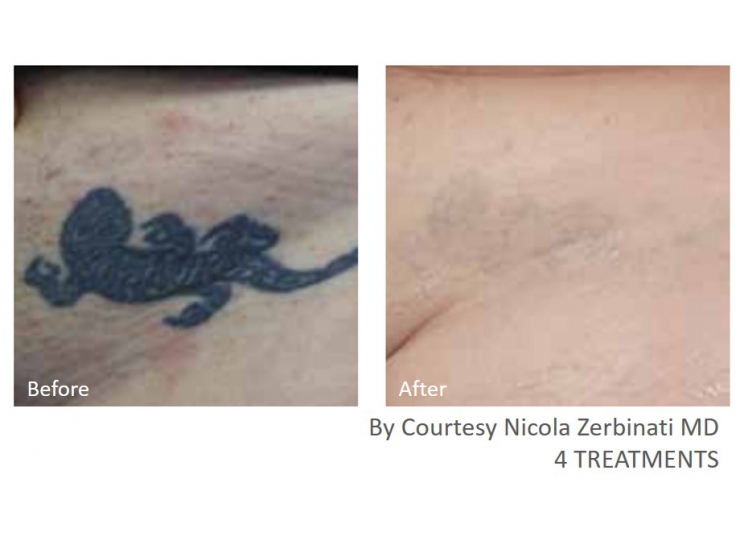 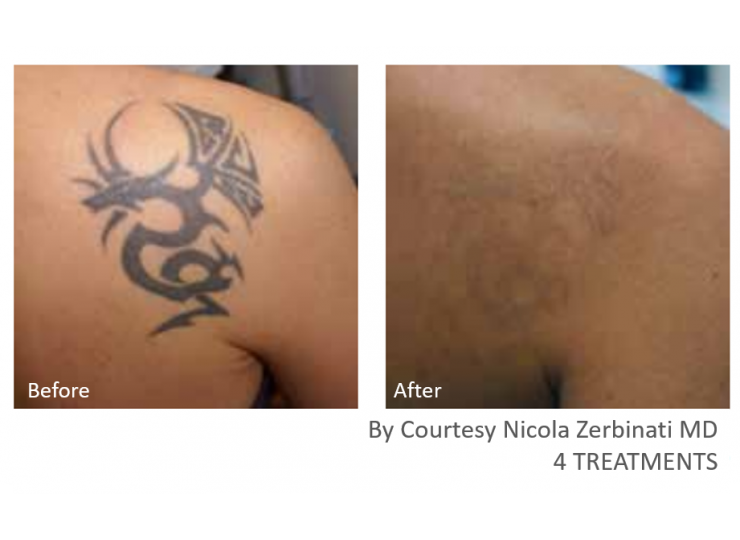 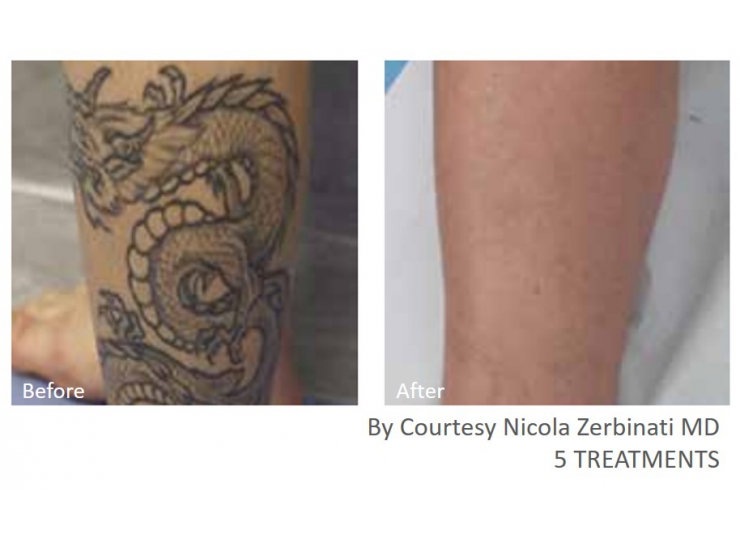 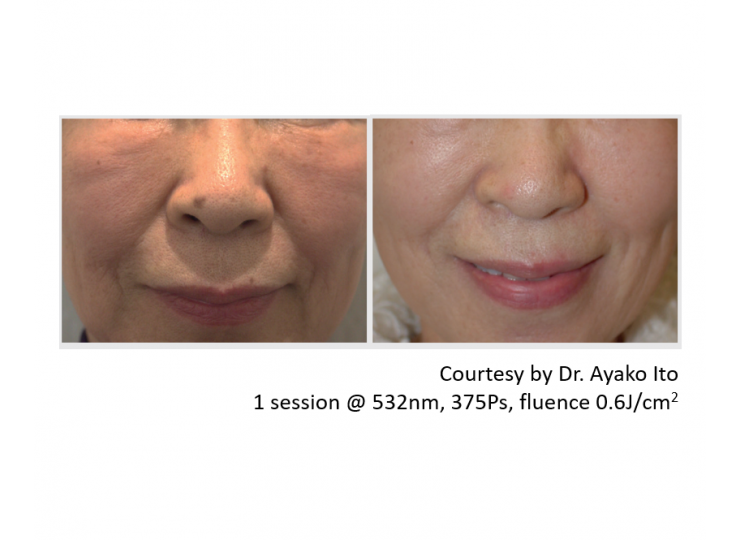 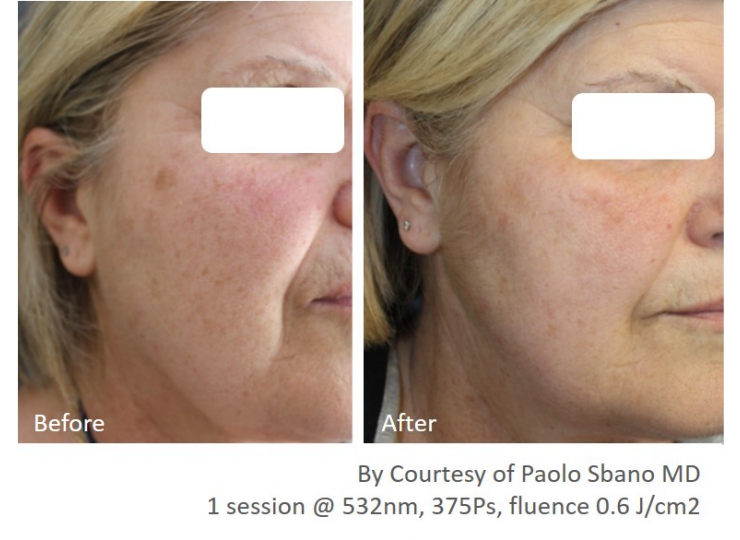 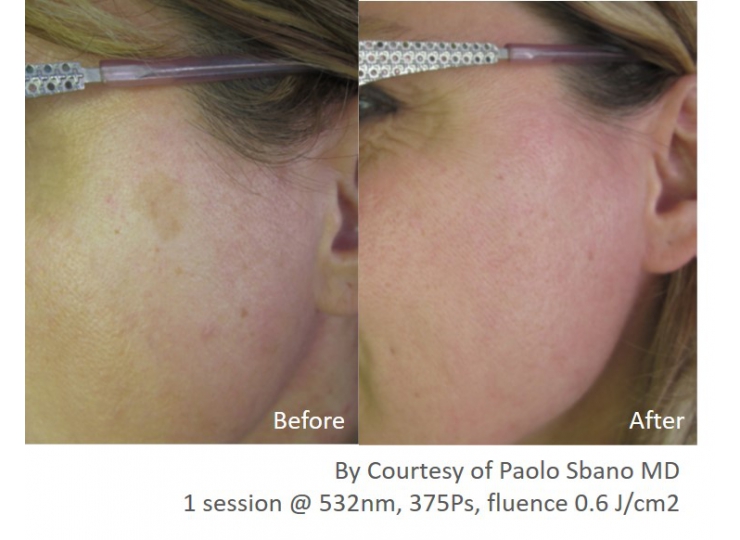 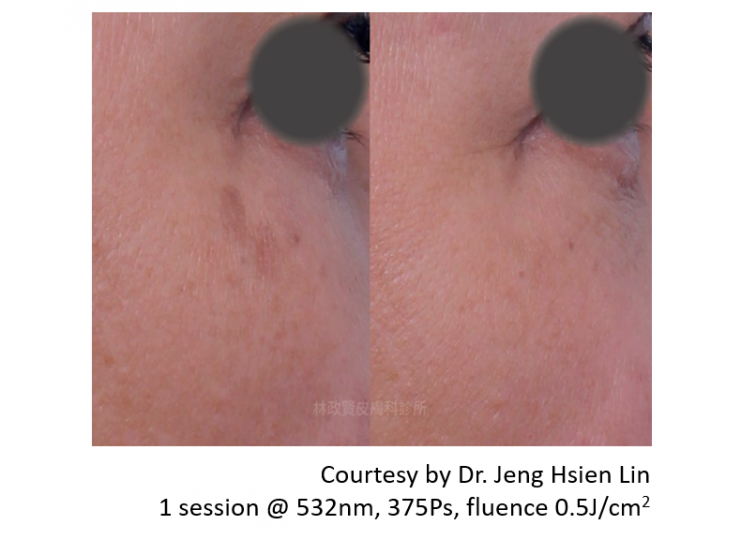 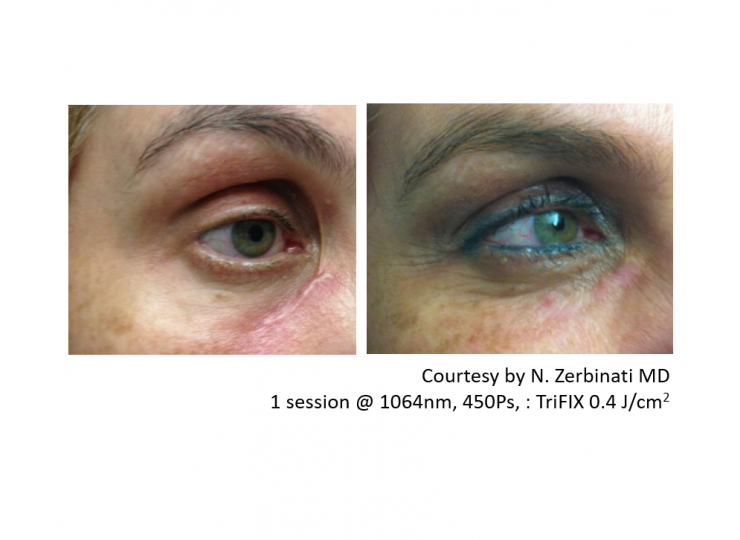 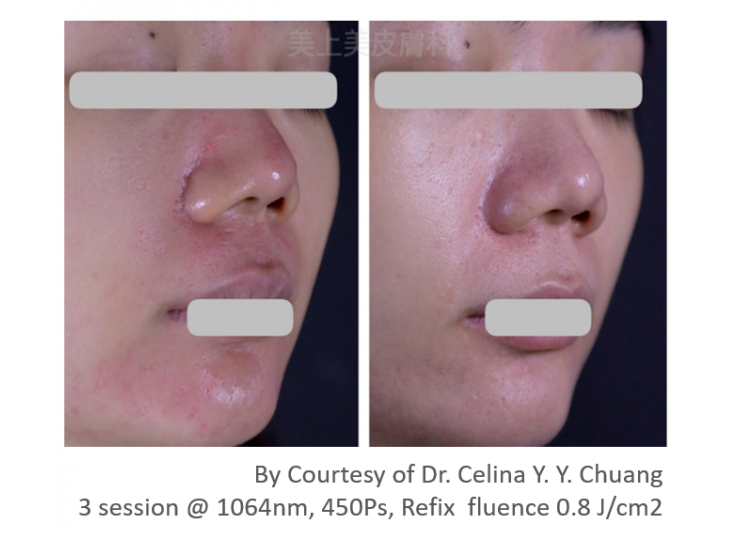 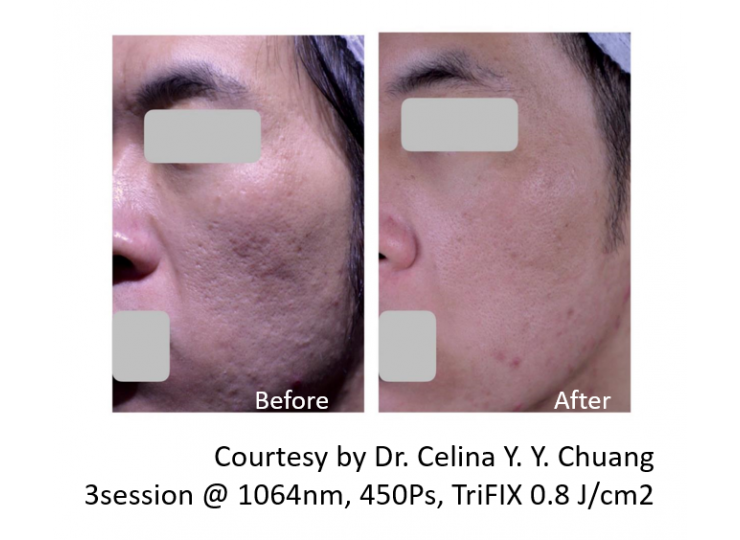 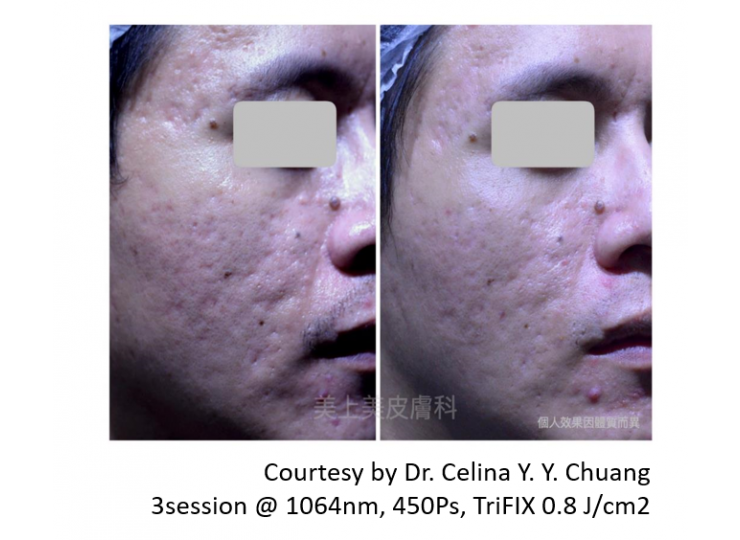 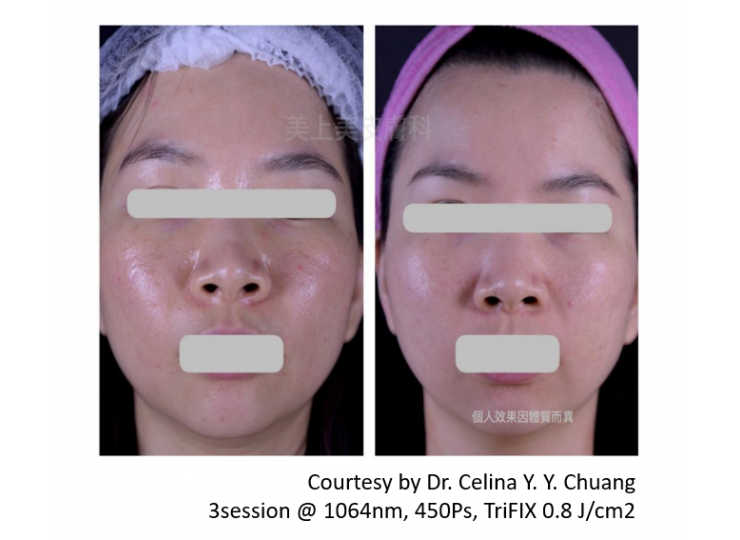 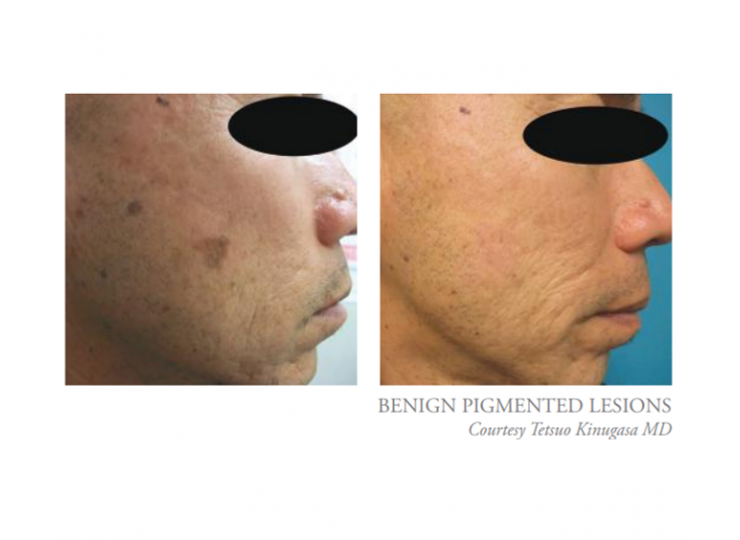 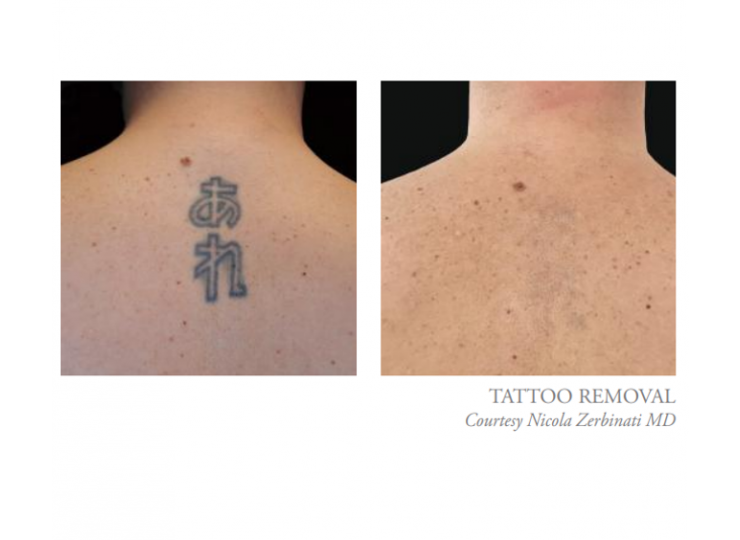 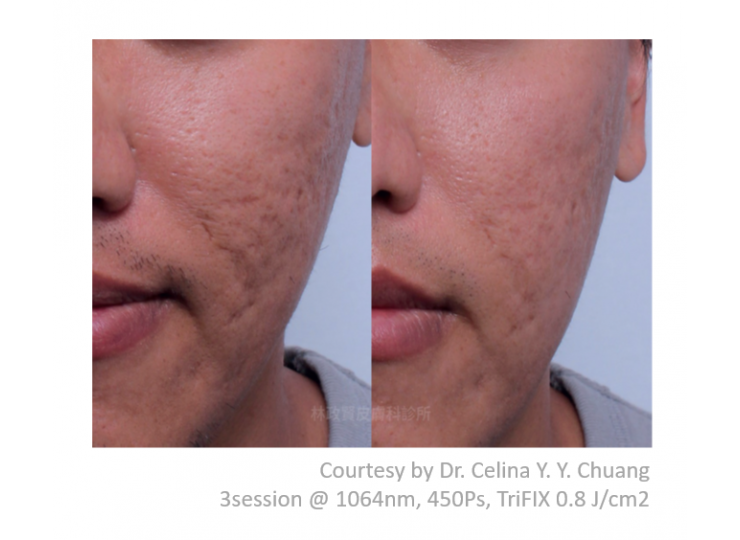